Get ready for the weabiest thing I’ve ever done in my entire lifeline (´ω｀★)♫ A long-awaited post on my experiences working as a ‘magical girl’ in the heart of otaku culture in Tokyo, Japan.

[warning: u may love this, or reaaaally really hate me for it ⚠️ ]

Until early last year, I worked at a Maid Cafe in Akihabara.

I’ve been meaning to write this for the longest time now but I never really got the chance to reminisce on it excessively until recently.

Despite it being my first ever part-time job, it was so much fun! I’m going to tell you why~

My alias, Nomia, is an anagram of my name. I had to think of one on my first day and didn’t get to prepare, but it’s also my gamer tag! I with it ever since.

Growing up with the cheesiest & weabiest dreams, I think a lot of you can relate having to at least once fantasizing about having these cute superpowers, becoming a magical girl, having a shoujo manga-like story, or to work as a cute maid in a maid cafe. It made me realize that I can have all of those things above by just being a メイドちゃん, or a ‘Maid-chan’. Walking in that scene always felt both real and unreal. I could be myself, and at the same time portray an extension of who I am or who I can be. I could be whatever I wanted to!

Ever since watching this shoujo anime called “Kaichou wa Maid-sama!”, the thought of working in a maid cafe entranced me.  The period I was working there, I was still studying in my language school. I had no experience in part-time jobs whatsoever, but I stumbled across it online anyways and strongly felt like I needed to give it a try. On this post, I wanted to show you guys some highlights, and some of my experience working as a maid in the heart of Otaku culture in Tokyo – Akihabara ♡

This is the uniform that I wore everyday! It was still a lil’ too big for me but I still think it looked pretty cute~

been working part-time in a maid cafe for a few months now ? it’s really really tiring but it’s a lot of sweet fun and I get to sing to my heart’s content + make friends! ? i’m not gonna publicly say where I work but if you found me somehow well you found me! ✨

All the maids were required to have their own twitter accounts and update them frequently. I posted my calendar on dates when I’ll be able to come work! I used to be able to have time to do 3 days a week shifts but it got lesser as I started fashion college. At the start of my Maid-chan ‘Career’ (笑), I still lived with my aunt and the apartment was quite close to this area. When I went off to college, I had to move 40 minutes away! Some of my co-maids had it way tougher though, having to commute 1-2 hours since their place would be on the outskirts of Tokyo.

ただいま！I'm back from spring break~

When a customer enters the cafe, every maid around the room has to greet the Princess and/or Master a welcome home. It’s also the same when they leave. Looking back now, it was such a surreal experience. In a mix of all this, it did feel like it was just a normal, waitress part-time job but with cake & cherries on top. Everything was so colorful and lively. In some ways, it genuinely felt like I was living in an anime for a little bit while the customers play along.

I was allowed to be myself- as long as I’m happy and positive, the customers will be too. Seeing them happy genuinely made the job a lot more fun.

There were rules of course- obviously, nothing inappropriate, no private messaging, any customers who disrespect the environment, especially the maids, will be booted.  I’d be lying when I’d say that there was never any instance that a customer would attempt to get the wrong idea- but before they get to do anything, they would be asked to leave ?

One of the things that set maid cafes apart from a normal waitress job is that you have to engage with customers and make them feel at home. As someone with a meek voice, quiet personality, and terrifying anxiety- it was hard. Despite all of this, I think I did a pretty good job (as a person like me) and improved over time. I was also able to practice my Japanese and engage with customers about the most spectacular things. Otaku culture, my own culture, video games, Japanese politics, or any interesting topics we can think of! Some of the frequent customers would also ask me to teach them English or Filipino.

I also got to draw with them, sing, and play cute board games~

Bonus! Sometimes, customers would request us to sing with them, or request us to sing for them! This is one of the things I found the most fun ꒰⌗´͈ ᵕ ॣ`͈⌗꒱৩ Trust me when I say that I don’t think I’m very good at singing AT ALL, and yet despite that they still clap for me and want me to sing more. It makes me so happy since I love singing despite everything. The song I’m most proud of and that everyone loves to hear me sing the most is Tokyo Ghoul’s ‘Unravel’. It was the perfect pitch for me. I get to do a screamo on that certain line and everyone goes crazy!!! ;_____; The customers were really sweet and so was the people I worked with.

Frequent customers would surprise us with the sweetest things. They’d bring in chocolates, ice cream, plushies, snacks they bought from their trips, and gifts that reminded them of us!

One time, a customer made the tiniest paper cranes and gave one to each of us! 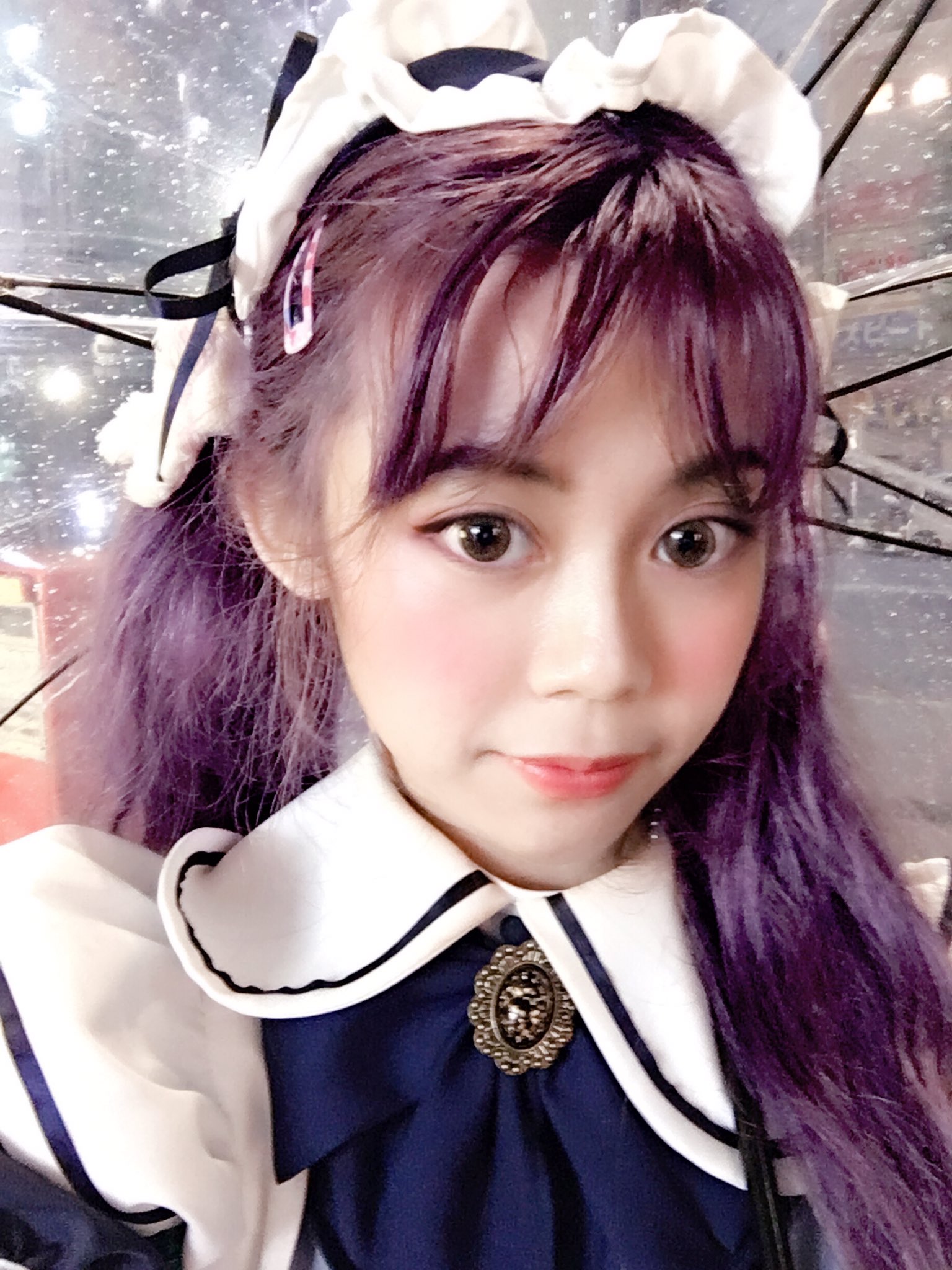 When customers were less during the day, maids take turns going outside to give out flyers to potential customers around Akihabara. It was tough! Sometimes there wouldn’t be many people, weekends were the most lively. Your voice had to be loud and lively to attract more people that are walking around to shop. We’d go on rainy days, cold winter, and hot summers.

A friend took this when she found me giving out flyers on the streets!

Beside me is Umiちゃん ♡ One of the sweetest girls I’ve ever met!

We started working on this cafe at around the same time. We somehow formed a bond and have stuck together since!

Over the year, we would have special themes and events. For example~

Even Halloween was a big thing. We’d have decorations all over the room???? Everyone would pitch in and work hard to prepare for the event!

On my first year of working, I dressed up as my version of Black Lady from Sailor Moon ?

I was a Sailor Moon antagonist for Halloween last night ????✨✨

On my second Halloween year, I dressed as Overwatch’s beloved D.va. I remember being so obsessed with Overwatch back then. You can tell who my main is from this too~

This was the year I went to Tokyo Game Show as D.va and I was quite proud of this one since it’s my first ever genuine cosplay. You can check out more about my TGS day here.

would you be my valentine? ?

We were asked to dress in our best Valentine’s inspired looks.

made with love ? hope you enjoy it my lord! ε(*´･ω･)з✨ pic.twitter.com/FccpvDELoJ

I also made some cute Valentine chocolates for our customers who were going that day ?

I’ve also had my birthday here!

the other week for my birthday event in the maid cafe, i became a part-time magical girl too ?✨?? a weab ass one at that lmao (but at least i was fighting crime ⚔️ hbu)

The staff asked me what I wanted to do for my birthday on that shift. We had a meeting for it and worked through the menu, theme, costumes, etc. I decided it to be a magical girl party ✨?

It was so much fun! My closest maid girls were there to celebrate with me. I had two special drinks that were inspired by my personality. A magical strawberry pink soda (non-alcoholic), and a mermaid dream lavender milk cocktail (alcohol). The taste is tremendously unique too ♡ I helped mix & tasted them to make sure that it’s something I genuinely loved!

It surprised and touched me to have received so many gifts and cake from my customers that dropped by ? The struggle going back home was real ?

I had a blast ? It was a busy shift! Everything that happened that day warmed my heart so much.

Friends & followers came to drop by too!

Some of them I became friends with even up until now ♡

Some long time friends who just wanted to go just to annoy me ?

Vina & Yuyu came through too ?

One of the best things working in this cafe was that I’ve gotten to know different opinions of people and Japanese culture with the customers I got to converse with. As well as made some of the sweetest, and cutest long-term friends I’ve ever met.

My Japanese wasn’t as good as a lot of the maids but I was glad that everyone was understanding, kind, and patient with me. My Japanese has gotten so much better working here!

Beyond the maid culture, this was a true learning experience for me. I worked there for a good two years! This was a fun job, but a real one. It can get very, very, tiring. Like all jobs, there are bad experiences, but also positive ones too.

Everyone gets a gift from me today! Yema, sweets from the Philippines*~ pic.twitter.com/xBf6qH0Nor

If you’re wondering why I slowly drifted from this job, it wasn’t because I didn’t want to anymore. I had to learn that I needed to prioritize my school work and had no choice but to decide. It was nice while it lasted and I thought it was the right time to say goodbye. I don’t think I can ever fully forget the fun times I had here.

I never would have guessed that I could have it me to have done this, but I did. Was everything just a dream?

Thanks for you for reading prince & princesses ?

If you wanna know more, you can check out this interview video Vina, (a.k.a. Mikan Mandarin) made for Youtube a while back on some frequently asked questions when it came to my experiences as a maid:

If you have any more questions, feel free to comment down below! It’s hard to attend to all the questions I get on my DM’s ?

All about the specific cafe: Unfortunately it has already closed down late last year ? Please don’t ask me for any more info on this! ?

you’ve got my number